…the survival of the magic power of the work of sculptors and painters has often been reflected in their social position on the fringe of society in a “bohemian” reservation.
Ernst Kris, Psychoanalytic Explorations in Art

Art has long been understood as a kind of magical, wishful thinking, and it is no more magically wishful—and hopeful–than when it is made in the desperate belief that it is healing, above all that it can heal the suffering body, or at least anesthetize both viewer and artist to its pain.  I think this is the motivation behind the idealization of the body in classical art, and I think it is the motivation of Hans Breder’s Mindscape/The Subtle Body, a video installation in the window of the small, hip Solivagant Gallery on Orchard Street in Lower Manhattan.  This “fringe” area is the latest au courant bohemian reservation of exhibition spaces, as the 80+ galleries there indicate, replacing the now all-too-fashionable (and pricey), and with that passé, gallery area of Chelsea.  Freud said that magical thinking involves a belief in the omnipotence of thoughts—the grandiose, narcissistic, infantile conviction that one’s inner thoughts could control outer reality (even change it, as though the serious intensity of one’s thoughts had social revolutionary effect)—but however immature and unrealistic magical thinking is, we all engage in it, for without it we would lose our will to live. 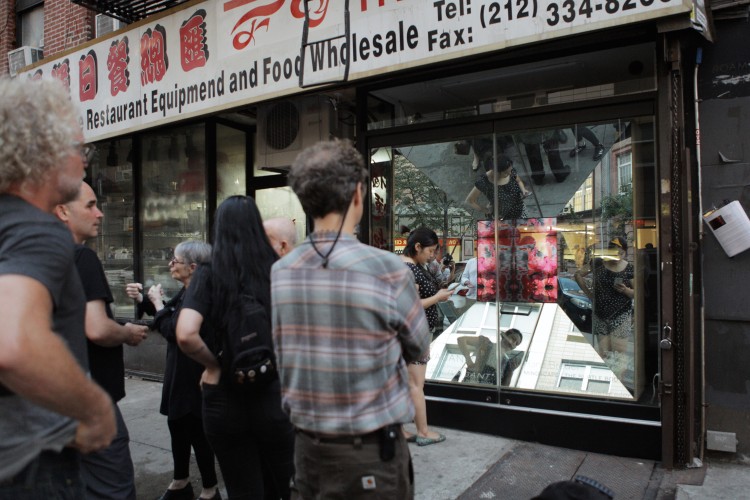 And we cannot live without our bodies:  Breder’s art has always dealt with the body, as his famous photographs of mirrored nudes indicates, and his current exhibition also does, as its theme—the seven chakras—makes clear.  “Chakra” is a Sanskrit word meaning “wheel.”  As the scholars Jean Chevalier and Alain Gheerbrant write, it is “applied to the hidden meeting points of the nadis or channels of the ‘subtle’ body, along which, according to Hindu physiology, the vital energy flows.  This mystical physiology sets these energy centers at intervals up the spinal column to the top of the head, and they could be described as ‘generators of etheric matter’ (avas).  From the base of the spine (the muladhara), kundalini, a static form of creative energy may be roused.”  The whole purpose of Breder’s exhibition is to rouse this creative energy from the base of the spine (the coccyx, the last bone in the spine)—the Base or Root Chakra—to the top of the head (implicitly the brain)—the Crown Shakra.  The passage, in which the creative energy becomes ever more dynamic and manifest, ascends vertically up the body, healing—energizing and enabling–each part it is associated with and flows through.  As the creative energy surges through it, it comes to everlasting healthy life.  Thus the Sacral Chakra maintains the health of the ovaries/prostrate it “informs”; the Solar Plexus Chakra, associated with the navel area, keeps it functioning “creatively”; the Heart Chakra keeps that organ healthy and beating; the Throat Chakra keeps the throat and neck area healthy; the Brow or Third Eye Chakra, associated with the pineal gland (for Descartes the seat of the soul), enables the mind’s eye to see insightfully. There are seven chakras; Breder’s installation devotes a day to each.  Seven is a number rich in symbolism; there are seven heavens, according to mystical thinking, and seven colors associated with each, and they can all be seen by the “perfect man,” that is, the visionary mystic.  Breder aspires to be one, and succeeds in becoming one, as his installation suggests.  He has said he is concerned to capture the “luminal moment of perception”—the moment when unimaginative observation becomes imaginative apperception. His early photographs use the mirror to do so, the current installation uses a more refined method, digital video, to do so.

Breder has always been obsessed with the female body, and the female body continues to appear in his chakras installation, but now in fleeting, fragmentary form.  It quickly dissolves in the creative flux of his rapidly changing “chakratized” forms, all kaleidoscopically abstract and colorful.  In the early black and white photographs the female bodies and the mirrors that reflect them are asymmetrically and precariously arranged in a kind of static or stopped pin-wheel.  In the chakras installation the wheel moves very rapidly and rhythmically, sometimes vibrating with unsettling intensity, sometimes peculiarly soothing.  But the wheel, whirling like an ecstatic dervish, never loses its balance:  the forms are dynamically equilibrated, to use Mondrian’s famous term.  They are also driven by what Kandinsky called internal necessity—intense feeling, above all, in Breder’s case, a feeling for the body.  Mondrian and Kandinsky are Breder’s ancestors:  his work has the same transcendentalist aspiration as theirs.  Indeed, it is the grand climax of the tradition of transcendental abstraction. 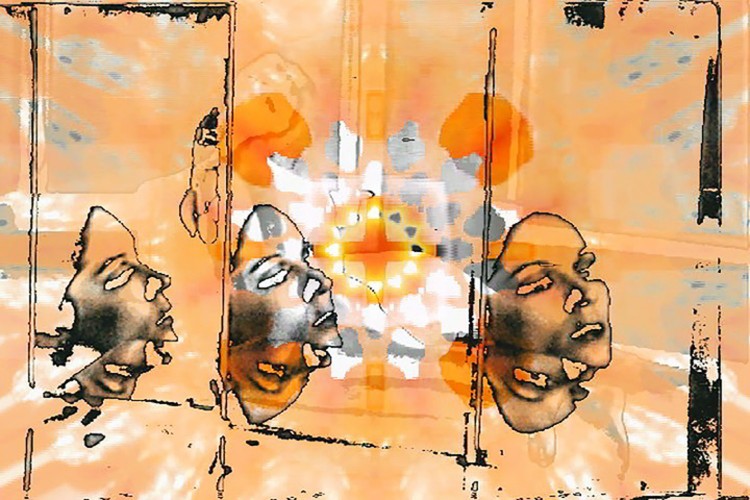 The influence of Malevich is also evident:  the compact square, iconic in more ways than one, often appears, slowly changing into an auratic circle in the course of the chakras.  Squares are often symmetrically aligned in groups of four, as though in homage to Albers.  Breder’s installation recapitulates, in dream-like condensation, the history of high abstraction, just as it recapitulates, in dream-like condensation, the history of his own early photographs, for the female figures that flicker across the screen are all echoes of the figures in them.  Each of the chakras is accompanied by music—often a high pitched hum, a relentlessly vibrating tone, forcing itself into one’s nerves–that Breder has composed on a computer.  Indeed, his chakras are computer-generated and computer-performed.  The sounds of a piano, trombone, and Tibetan singing bowl are digitalized and ingeniously integrated electronically.  Breder says the geometrical forms and the music forms are symmetrically arranged, that is, the image and the sound vibrate at the same frequency.  The symmetry is maintained even as the audiovisual pulsating forms constantly change, disintegrate and re-integrate into gestalt wholes.  Fragments symmetrically align even as they seem asymmetrically odds, and remain dynamically different even as they stabilize into holistic forms.  Performed, each chakra seems to be informed by some enigmatic élan vital, made manifest by the changing image and the piercing music. Breder, the founder of the intermedia program at the University of Iowa, is known for his techno-aesthetic sophistication, not to say neo-artistic wizardry.  Breder, a German-American painter, photographer, sculptor, and videographer, has been celebrated for his “phonetically merged, imagedsound fusion,” involving the use of “digital feedback.”  He conceives of the chakras as a transmedial fugues played on a computer.  “Transmediation,” he says, is an “opening to meditation.”  Digitalization is “dematerialization,” he notes; for him it also means spiritualization, when carried out with aesthetic sophistication, emotional intelligence, technocratic know-how.  One is invited to meditate on the works as you see them—they are meant to put one in a meditative state (they certainly are “en-trancing”)—but, I have to say, this was difficult to do, for they were exhibited, surrounded by mirrors that reflected the viewer, in the window of the storefront gallery on a very busy Orchard Street.  On the opening night the street and galleries were packed with people.  The street is always “busy” with noise—the sound of traffic and shoppers (the galleries are small shops, like the clothing shops and cafes near nearby)—which is not exactly an environment conducive to meditation, let alone to careful attention to serious art.  But Breder wants outreach—wants to leave the bohemian reservation, wants to offer spiritual nourishment and enlightenment to the passing masses, just as Buddha did. 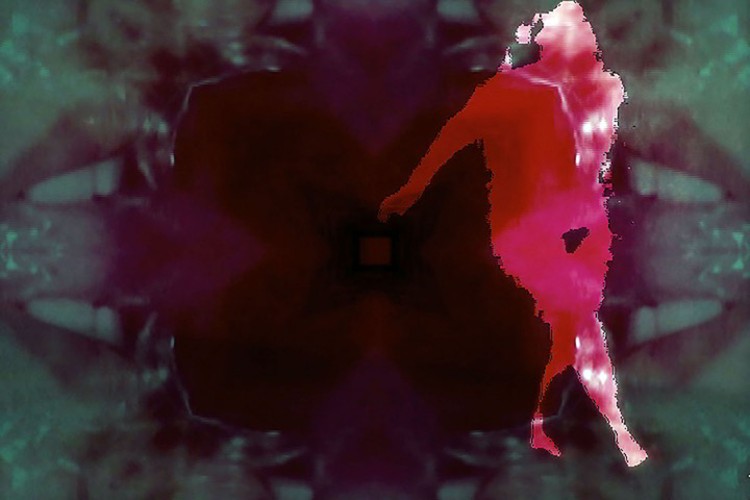 The chakras works proclaim that he is a Bodhisattva, that is, a person who has attained prajna, or Enlightenment, and thus can finally leave the perpetually turning wheel of death and reincarnation—the cycle of suffering that is life and death–but has decided to postpone Nirvana in order to help others attain Enlightenment.  It is an act of compassion, which is what Breder’s hyperactive chakras are:  they are meant to enlighten us about the body and soul–to show the soul in the body, to show that the material body is a transient, even specious form of the soul.  They are in effect his last artistic will and testament, a consummate spiritualizing gift to the world.  Being moved by them—swept along in their swift, earnest current–is an enlightening experience.

But the technical brilliance of Breder’s chakras is a means to a therapeutic end, as he himself says.  When he made the mirror photographs he was in the prime of his youth and in good health; his female models/performers are full-bodied, healthy-looking young women.  They seem invulnerable; sometimes mirrored in the running water of a spring, they become lyrically natural—virginal nymphs.  They were his muses, and with that surrogates for his creative self.  But now they have become more myth than substance:  Breder is now eighty, and suffering from cancer.  His body has weakened, although his energy—the energy with which he makes art–is still amazing.  As he has said, he wants to use it to attempt to magically cure his cancer.  The chakras works are a sort of “white magic,” as their stunning luminosity suggests—it “enlightens” and at times overwhelms the colors–meant to oust the “black magic” of cancer.  He wants to heal his suffering body by becoming enlightened about the sources of its energy in the hope of eternally renewing them.  For him the energy not the body is eternal.  It may be a futile effort, but Breder’s chakras works are a tour de force demonstration of the omnipotence of artistic thought, not to say its mystical wisdom at its best.

Back to Issue 37 Nonfiction.